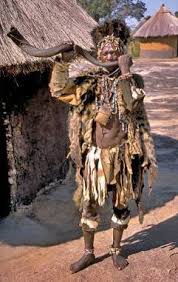 Here’s an example: I was sitting with my farm cooperative at a steel table in a mud walled bar at 10:30 one morning.  We’d spent the previous four hours working in their fields. There were enough of us in there that the conversation broke into two groups, one at each end of the table. The far end of the table erupted as two back legs of one of the chairs cracked off, throwing its occupant to the floor.   The entire table swung towards me in unison blurting things like “How’d you do that?” and “Wow, you must be really strong!”  The guy who had fallen was apparently disrespecting me when his chair came apart.  Everyone was certain I’d used my powers to drop him to the floor.

They were certain because that is how their world works. Which was also the reason the villagers were so eager to find whoever had a reason to blow my house down. This wasn’t just some random natural event – it had happened for a reason. And everyone in town wanted to find out what that reason was.

Sebou was true to his word about discussing the situation with the village elders. The elders said I needed to hire a charlatan, which is French for ‘sorcerer’ or ‘medicine man’. They even told me which one to get. He was an old man from neighboring Benin.  He arrived wrapped in a protective covering made from woven yellowed fronds. The elders also instructed me to buy a goat, seven chickens, and a big clay pot of local brew. Then they invited everyone in town.  The townsfolk slaughtered the animals and set them to the grill.  The beer flowed as the old Beninois circled the remnants of the house.  He trailed a stream of village children as his entourage.  Soon he entered the roofless structure.  There, he circled each room in his organic armor, shaking rattles and intoning chants.

After some time he came back out and settled on a stump beside the village chief. He asked Sebou to translate for me as the villagers gathered round.  “A very angry spirit blew your roof off,” Sebou translated solemnly.  “He says you are lucky you weren’t killed. He says the spirit let you live because the village is happy you are here.  But you should never have come and taken this house. He says the village knows that this house is bad.  It should not have been built next to the town’s oldest burial ground.  The tin roof disrespects the elders buried there.”

Sebou added his own aside.  “You know the man who built this house came running out screaming one night and he never came back. He’s a soldier in Lomé – I know him.  A really tough man – and he came out screaming. Then he rented it to two young women and one was bitten by a viper the same week she moved in. That woman died and the other woman moved out.”

“So I should never have moved here,” I said.  “That’s what you’ve been telling me all along.”

Sebou was nice enough not to rub it in.  Instead he tipped his head to listen as the old witch doctor spoke.  “The charlatan says that the ancestors tried to coax you out, but you wouldn’t leave. He said they sent scorpions to chase you out.” I smiled and nodded. Everyone in town knew about the scorpions.  I kept a tally on my wall. “Lots of scorpions,” I confirmed.

“And you had a poisonous snake inside?” Again, this earned a smile. The village telegraph had certainly been at work. I could only think of a couple of people I’d mentioned that story to, but I wasn’t too surprised that it had gotten around. Anything unusual I did soon became the talk of the town.  Still, I had to hand it to the charlatan.  He’d done his homework.

Finally Sebou turned and looked at me wide-eyed, as though he couldn’t believe what he’d just heard. “The old man says they sent a spirit.  He says that you were visited by a ghost.”

This was the first comment that hadn’t made me smile.  I’d thought about the eerie nocturnal visit frequently, but I was certain I’d never mentioned it to anyone.  The truth is that I was embarrassed by my reaction; my near-certainty that I had really seen a ghost. After a moment, I confessed in front of the entire village.  “Yes,” I nodded. “I was visited by a spirit.”

An aside: I returned to Kpagouda for the first time last year with my wife and kids. It had been almost forty years since I’d been there. I looked for people I remembered or for anyone who might remember me. It turned out that very few of the villagers from back then are still alive.  I did manage to find Sebou’s sole surviving wife of the four that he’d once had.  She helped me find a couple others who’d been around back in my time. We all shared a pot of local beer and reminisced about those days. When I asked if they remembered the story about my old house, one of the men said, “Remember it? Everyone in Kpagouda knows that story, even the little kids. We talk about it all the time.”